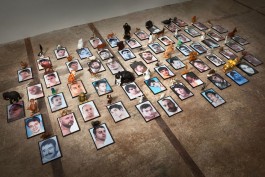 About the exhibition Found a New man

The idea came to me when I rediscovered the Mae West film I’m no Angel (1933), which I hadn’t watched in over thirty years. And there, one scene, Found a New Man, was the déclic. A lion tamer in New York, Mae meets, finally !, a rich man. She places with her large fingers, her perfect nails, pointy, very well kept, 1930’s style, the photo of this new love in a small silver frame (we can trust Mae that it’s solid silver) next to a porcelain deer. With her middle finger she lightly touches the animal in a delicate caress. The frame opens up and we discover, on a circular, sophisticated table in three levels held together by a central axis, some twenty animal figurines against which she has placed, small framed photos of different men. The collection of the men in her life, of the past, always in the making. And then she begins to sing, “I found a new man”.

It happens that I have the habit to associate people with animals. It’s quite classic in animation and cartoons. In Bécassine, dogs always have the same face as their owners. In the beginning of the great Walt Disney classic the 101 Dalmatians we encounter a London where all dog owners have the same head as their pet....I’m no Angel was such an inspiration when I discovered it as an adolescent in the Cinémathèque that Mae West became one of the great figures of my life. This scene had particularly struck me, I had forgotten it, but it must have stayed with me, such a founding image.

I like Mae West for her freedom. She is between the Marquis de Sade and the Suffragettes. Erroneously, feminists do not consider her one, yet in her time she did quite a bit for the emancipation of women. She only speaks of sex, it’s central, but she never unveils her body, which remains a mystery. As she is always dressed in a long gown that conceals heels of at least twenty centimeters, she has invented a swaying walk that allows her to find equilibrium on these immense heels. “It’s not what I do, it’s the way I do it. It’s not what I say, it’s the way I say it” : this is her philosophy. Her films illustrate this : she is stout, she arrives in Hollywood already aged-in I’m no Angel filmed at the beginning of her career she is forty years old-, but she is a total sex- symbol. Once she appears, she is the lighthouse, eclipsing all other women ; and men are crazy for her. She has the world under her spell, to an absurd point. A queer dream for the queens of the seventies, men addressing themselves in the feminine.

Her Marquis de Sade aspect is her collector side. Without being conscious of this, I imagine, she carries within her the libertinism of the XVIII century. Both she and the marquis fell victims of very violent censors : the Présidente de Montreuil for Sade, the forces of virtue for Mae.

Associating people with animals is 90% of the time, affectionate. The comparison is not degrading, on the contrary. They are perfectly in place in the world, it’s us, humans who are not.

These connections are rarely psychological or even physical. They can express equally well a general spirit or an attitude, sensed during the time of a sitting. All fifty-seven men in Founda New Man share the common point of having posed naked for me. I have associated a spider with F. because as he undressed he pretended to be a spider....When D. comes to the studio he walks like a penguin, hands in his pockets he moves by spreading his legs. This sudden illumination can be tied to any moment in life, sometimes that of the first encounter. When I saw M. for the first time, who later became a friend, he was casually gliding in a musician friend’s car at the end of a concert, with all the attire of a star (big car, driver, staff...). In a flash, he seemed to me like a squirrel.

And then, all these animals -it’s also Germany. They love zoos here, they speak constantly of them in the newspapers. In Berlin, we get news of one bear star regularly (the bear being, besides, the city’s symbol). In the flea markets, there is no stand without at least one porcelain figurine of a dog, a deer, a fox, a lion...The city’s ladies all have an animal statuette featuring on a shelf or on a chest of drawers. They are like Lares Familiars (Family Guardians), the protectors of the home. In the Kneipes, (the equivalent of pubs), where we often see them, these statuettes have a precise meaning tied to the story of the landlords. Similarly, there are those who are passionate for a particular animal and collect it like mad. I go to the flea markets of Berlin every Saturday and every Sunday, even if they are quite poor in what they offer. It’s a pleasure, a way of understanding the intimate history of the country. Finally, I had in my mind, since I discovered them in Berlin, frames from Woolworth’s, whose A4 format was to my liking. They are practical as they are just the size of the print. I had first thought of inserting black and white photos, but when I made some drawings, Rico’s portrait, then that of Bertrand, color photographs seemed like a better option : they were direct, self- evident next to the animals. 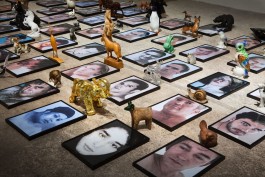 Tracing drawings have a bad name in the art market : they are considered uncommercial, they are not seen as real drawings. Though it’s just a way of drawing like any other. I draw figures badly with a raised hand, so I always start with a photo that I trace. In the beginning, I was projecting the tracing drawings, enlarged, on pieces of paper and I was drawing the figure. Then I discovered there were better ways to organize composition. I would trace the first figure, then I would place this on a photo and see how they could coexist.

Superimposing images goes back to the origins of painting, even : the prehistoric caves. We know, for instance, that three bisons were drawn, then hundreds of years later, another hand came to add above them, four horses. That’s why we get lost in front of these pictures which are at the same time the fruit of will, chance, and time’s hazards.

What I am looking for is an openness to the improbable, the incongruous. The accidental is fundamental in my work. The days’ tabloids (I love the british trash press) can bring me the image that would function well within an already existing piece. This creates strange correspondences that are the essence of my drawings. 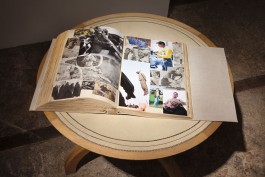 Le Journal analogique is central in my work : it stands between the tracing drawings (which come entirely from the daily press), the collection, and my Journal photographique (photographic diary). It allows me to get liberated from connections that are too obvious. It’s in a shambles (but double spread after double spread, totally coherent), an outlet where I can include images uniquely for their seductive colors, the geometric lines that traverse the scenes, the figures, or because of recurrent themes that suddenly seem to jump. It’s a way tobe freed of often obscene impulses, sometimes barbarous (crimes, wars), most of the time pornographic.

Art is spiritual elevation ,whereas sex, for me, means to be cut-off from the sublime in order to indulge in impulses. Artistic pornography seems like an impossible challenge (see Bruce Bendersoni) It repels the spectator, who arrives with a model of an artistic reading and falls, in disgust, on what is received as a sexual loosening, an indulgence. This is where my temptation to engage with, and propose Le journal analogique as a perfectly coherent object sprang. Sade, has obstinately catalogued vices, perversions, beyond the imaginable. In this, he is tremendous. What I seek, is an exact place. A bit like Jean-Henri Fabreii who once he follows the entire life cycle of an insect, then shows in detail the act of mating. I entertain the thought that I am a Fabre who observes bodies. Taking pornography out of its ghetto, its codes, its pointy high heels, its strings, its aseptic rooms, its body- builder guys, its filthy leather armchairs. Even amateur videos posted on the Internet are impregnated with this aesthetic. The only interesting thing in these is their awkwardness. Sexuality, eroticism, pornography that flood contemporary life via the internet or advertising that is spewed out on sites with completely different content, are today completely excluded from art. Art fairs and biennials succumb to prudishness.

It’s a diary that I’ve been keeping for ten years. I use a thirty-six exposures, in silver emulsion, Fugi 135 mm film, there is no editing, the prints, called “de lecture”, are small, 8x10 cm, presented in nine pocket sleeves, in large binders. I always carry my camera around. I may not use it for a couple of days, but it’s always there, in my pocket. The results are not displayed on a screen, since it’s not numeric, I have to wait for the film to be developed to know what I have done, and to me this is the absolute consolation. In effect, I am not tempted to retake a failed shot as I don’t discover it during the stride. Sometimes it’s photos taken on the sly-how could I do this if the outcome displeased me and I worked with digital ? I note the photo I have taken (people, places) and then I forget about it. It may sound backward looking, but in a way, silver emulsion, it’s painting. It’s my life, this diary.

Le Journal photographique is an equally important source of material for my work. Elements of my drawings are drawn from it. (In this exhibition, I am showing just a sample (three binders). 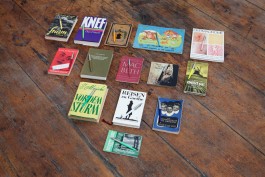 I have always loved Parker pens, because of the arrow. Recently, in Berlin and Istanbul I found pens in new colors. In the studio I combined them with post- cards, books, plastic bags of the same color. There was also, unconsciously, the idea of a return to painting with these color games. They were scattered almost everywhere and the only one who noticed was Helena Papadopoulos. At first, I wanted to reproduce this in the gallery, but it had a paper chase feel to it that didn’t make sense. The only ones that worked were the ones corresponding to books. Like the rest of the show, it’s about correspondences, associations, this time, purely chromatic, with books that count for me as representative of my library.

I settled in since the beginning of summer. To see what it gives, to make specific work. That was the deal with Helena. Found a New Man came out. I was going every day. The space has a good vibe. I was writing. I tried out several things that I didn’t keep. The coming and going between the gallery and my studio was good. I asked five artist friends to film the work in progress. There will also be a short film by Santago Reys, a longer one by Frederic D., another one by Lucile Desamory and yet another one by Guillaume Cailleau in 16mm, which will not have been completed for the opening. Plus a surprise by Louis-Philippe Scoufaras. 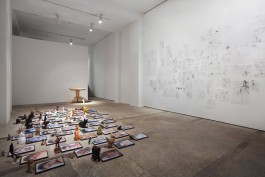