On the ground floor, a grotto ; upstairs, it’s like the deck of a boat.Without especially meaning to, Christophe has recreated a fragment of his world in his studio. Here are his love of rock painting and his passion for the navy and sailors, for shipwrecks –an eroticised fantasy world (one of his favourite films is Alexander Sokurov’s Confession. Immediately, we are filled with a feeling of serenity. Newspapers (accumulated sports pages from English tabloids), photos and objects picked up here and there form a false chaos in which each little fetish, even a pine needle, has its place. A row of working tools standing to attention. It is here that Christophe conducts his private, secret ceremonies of which canvas and paper are both the stakes and the trace.

The experience of seeing a new work can sometimes be quite a shock for those bound to the artist by friendship or love. And because Christophe works intensively, month by month, new works come in slews. Unsettling, probing.

Denise Klossowski told me of her astonishment at the “intercepted” boys suddenly brought forth by the lines of her husband Pierre. “We were no longer in an atmosphere of propriety”, was the straight-faced comment of this woman who had herself gone in for similar artistic games. But there it was : she was confronted with a new truth about Pierre Klossowski, wherein she was upstaged by youth and the other sex. I was similarly stunned when I saw the Fox cycle, in which a mutant monster infiltrates an oneiric netherworld. Intrigued by an enigma.And,above all, struck by its pictorial impact, as I was in the case of One Past Midnight (muted images of the disasters of war from the trenches), The Large Éric and The Small Olivier. So much so that I gave up all thought of biographical comparisons. I no longer started with Christophe Berhault, I started at the work. And to that I will confine myself, absorbed by its mysteries.

“Follow a Star”. What star ? Might it be youthful beauty, that absolute quest ? The star that goes from face to face and suddenly twinkles, signalling beauty ? Might following a star also be a spiritual quest ? “Deep down, I am a mystic and I believe in nothing” : I think that Christophe could echo Flaubert’s words. An almost mystic quality infuses these faces captured in crowds in the Paris metro or RER, in bars, in the street (Focus Free 2 p. 13). First photographed, then drawn. In the work on the cover, the artist’s drawing endows a hoodie’s lost- looking face with the mien of a monk. The powerful interiority, gravity, ambiguous looks and solitude all reveal a contemporary soul.

In Focus Free 1 (p. 45), we see a now globalised silhouette. The manifestation of an international norm for male backs and buttocks ! Unified and wearing standardised clothes in Amman, Las Vegas, Saint-Malo and Beijing. The photos are taken on the artist’s travels, then interpreted by the artist’s desiring gesture,which clears away the background, other figures and objects, and focuses, homes in. A few years ago, Christophe covered the walls of his studio with some two hundred and thirty drawings from this series. The sheer quantity induced a powerful sense of rupture, of men turning their backs, of men leaving.

Christophe feels a need to classify, to set up series. And to do so with men, with women, with their gestures and postures and parts of their bodies, but also with flowers and insects and, soon, for his bestiary project, animals in general. Nothing is systematic : behind this stab at a great inventory may lie that childhood dream of controlling the world. Today, the various classifications follow that most subjective of curves, artistic necessity. Le Répertoire (p. 25) stands as an emblematic statement of this approach, which continues with The Weatherley Group (p. 57). Men and women, captured one by one, in all their nudity, are absorbed in thought, in introspection, do madness just to be mad, scream just to scream, are obscene just to be obscene,masturbate, contemplate, pose for the mirror, question the mirror... Each model thus revealed by the

sessions at the studio brings along a distinct and fundamentally intimate world. With them all, the artist establishes a lovers’ dialogue by the caress of the pencil. Once the images are assembled on the wall, countless unlikely connections are woven between them. Telescoped together come pure folly and reason, obscenity and candour, normality and fantastical figures verging on the grotesque, eroticism and pornography. Damnation and paradise. Le Répertoire makes us see the hurly-burly of contradictory drives and aspirations with which we must negotiate all through our lives.

Sometimes, the figures flee solitude and come to inhabit great human landscapes. Les Grandes Études (p. 80-87) simultaneously evoke Lascaux, the Dionysiac ceremonies of the Villa of Mysteries and, by their sculptural aspect, the preparatory drawings of Michelangelo. The Large Éric – Éric being the friend who sets the tone for the composition – echoes the vocabulary of rock painting : motifs at the bottom, in the air, lined up alongside each other or repeated like signs. Christophe adds that, for him, what is missing at Lascaux is the hunter. The fabulous form of the naked hunter is a recurrent figure in his work. Here, its virile and hieratic sovereignty towers over the crawling, abandoned figures (an allusion to Salo or the 120 Days of Sodom ?) that are reduced to human prey. This work entrances like a splendid erotic dream.

Much more turbulent but just as enigmatic is the Normandy farmyard out in the woods that serves as the theatre of The Small Olivier. Who knows, perhaps this was the place escaped from by Fox (p. 89-95), a kind of mythological monster of uncertain sex with a human body and fox’s head. Cunning like Reynard the Fox and at the same time totally mixed up like the eponymous character in Fassbinder’s Fox and His Friends who wears his nickname on his blouson and

thinks he’s the boss when in fact he’s everyone’s fool. This repulsive, disturbing and no doubt perverse figure recalls the claustrophobic world of Pierre Molinier. Fox the voyeur knows all about going unnoticed. It’s a knack he takes advantage of to slip into worlds that clearly attract him, and whose denizens - supermodel footballers, sexy terrorists - stand in comic contrast to his own thin, deformed figure. Dashing worlds of victory and galloping horses, of juvenile splendour. Of gigantic flowers, loves and flying butt plugs... 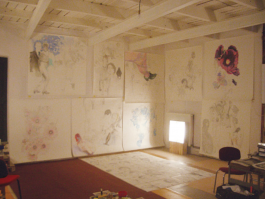